首页 > 新闻 > 行业知识
31
08
The History and Types of Gear
分享:
1.What is Gear?
A gear is a kind of machine element in which teeth are cut around cylindrical or cone shaped surfaces with equal spacing. It is widely used in mechanical transmission and the whole field of machinery.

2. The History of Gear
As early as 350 BC, the famous ancient Greek philosopher Aristotle recorded gears in the literature.
Around 250 BC, the mathematician Archimedes also explained the use of the turbine worm winch in the literature. The cog wheel is still preserved in what is now Katsfein, Iraq.

Gear also has a long history in our country. According to historical records, gears were used in ancient China as far as 400~200 BC. The bronze gear unearthed in Shanxi is the most ancient gear found so far. The south-pointing cart as a reflection of the achievements of ancient science and technology is a mechanical device with gears as the core. During the Italian Renaissance in the latter half of the 15th century, the famous generalist Leonardo Da Vinci made an indelible contribution not only to the culture and art, but also to the technological history of gears. After more than 500 years, the prototype of the gears is still preserved.

It was not until the end of the 17th century that the shape of the teeth that could transmit motion properly was studied. In the 18th century, after the Industrial revolution in Europe, the application of gear transmission became more and more extensive. Cycloidal gears were first developed, then involute gears, and by the beginning of the 20th century, involute gears had become dominant in their applications. Since then, the displacement gear, arc gear, bevel gear, helical gear,etc were developed. 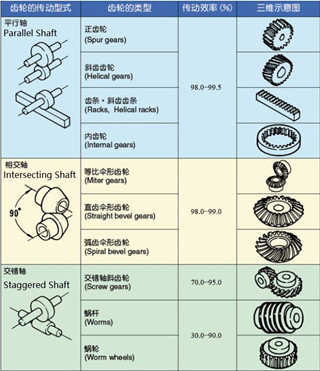 The efficiencies listed in the table above are transmission efficiencies and do not include losses of bearings and agitating lubrication. The meshing of parallel shaft and intersecting shaft gear pair is basically rolling, the relative sliding is very small, so the efficiency is high.
Staggered shaft helical gear and worm gear and other staggered shaft gear pair, because they are through the relative slide to generate rotation to achieve power transmission, so the impact of friction is very large, compared with other gear transmission efficiency decline. The efficiency of gear is the transmission efficiency of gear under normal assembly condition. If the installation is not correct, especially if the bevel gear assembly distance is not correct and there is an error at the cone-intersection, the efficiency will be significantly reduced.
3.1 Gear with parallel shaft
1) Spur gears
Spur gears are a type of cylindrical gear, with shafts that are parallel and coplanar, and teeth that are straight and oriented parallel to the shafts. Because it is easy to process, it is most widely used in power transmission.

2）Gear Rack
A linear rack and pinion that engages with a spur gear. Gear racks are utilized to convert rotating movement into linear motion. A gear rack has straight teeth cut into one surface of a square or round section of rod and operates with a pinion, which is a small cylindrical gear meshing with the gear rack.

3）Internal Gear
Internal gear is a gear with its teeth cut in the internal surface of a cylinder and meshes with spur gears. It is mainly used in planetary gear transmission mechanism and gear coupling and other applications.

4）Helical Gear
Helical gears are one type of cylindrical gears with slanted tooth trace. Compared to spur gears, they have the larger contact ratio and excel in quietness and less vibration and able to transmit large force. And they are widely used because of its higher strength.Axial thrust is produced during transmission.

5）Helical Rack
A strip gear meshing with a helical gear. Equivalent to when the pitch diameter of a helical gear becomes infinite.

6）Herringbone Gear
A herringbone gear, a specific type of double helical gear, is a special type of gear that is a side to side (not face to face) combination of two helical gears of opposite hands. It has the advantage of not producing thrust in the axial direction.

3.2 Intersecting Shaft Gear
1）Straight Bevel Gear
Straight bevel gears are the most common and  the simplest of these bevel gears with their teeth being straight and pointing toward the apex of the cone. Therefore, bevel gear as a transmission are widely used.

2）Spiral Bevel Gear
A spiral bevel gear is a bevel gear with helical teeth and curved lines. Although it is more difficult to make than spur bevel gears, it is widely used as gears with its high intensity and low noise

2）Staggered Helical Gear
Name of cylindrical worm pair when driven between staggered shafts. Can be used in helical gear pair or helical gear and spur gear pair. And they are used to transmit the motion between two staggered shafts in space Although it runs smoothly, it is only suitable for use under light load.

3.4 Other Special Gears
1）Face Gear
A face gear is a disk like gear having teeth cut on the face more or less radially and engaging with a spur or helical pinion, the axis of which is at right angles to it.

2）Drum Worm Pair
The general name of drum worm and worm gear meshing with it.  Although it is difficult to manufacture, it can drive large loads compared with cylindrical worm pairs.

3）Hypoid Gear
A hypoid gear is a style of spiral bevel gear whose main variance is that the mating gears' axes do not intersect. The hypoid gear is offset from the gear center, allowing unique configurations and a large diameter shaft. The teeth on a hypoid gear are helical, and the pitch surface is best described as a hyperboloid. The meshing principle of large and small gears is very complicated, which is similar to that of arc gear after eccentric machining. 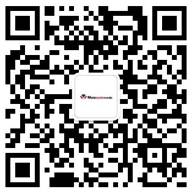 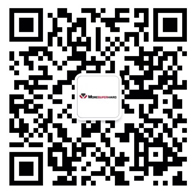 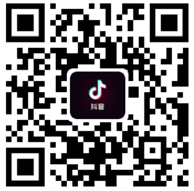